Careers for Individuals with a Criminal Justice Degree 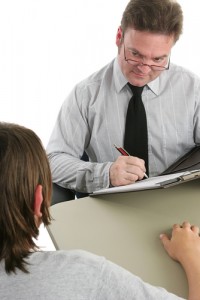 Criminal justice is the system of law enforcement, legislation, practices and organizations used by the government to control crime and uphold civilian laws. So how much can you earn confronting criminals and keeping the country safe one city at a time? Find out the answer as we explore the job profiles of those who get paid to fight crime.

The most common criminal justice career refers to a government employee who enforces the law, maintains order, preserves peace and protects lives.To become a police officer, a high school diploma or GED equivalent is the only educational requirement to get started, but candidates must pass rigorous tests of physical fitness, psychological testing and extensive background checks. Cops who earn a higher education, online or on campus, have the best potential for career advancement. An associate degree or bachelor’s degree in criminal justice is a requirement for supervisory or detective positions.

How much do police officers make? According to recent reports from the Bureau of Labors Statistics (BLS), the average salary for police officers and sheriffs is $58,720 per year. Job experience and higher education can lead to advanced positions. According to the BLS, the average salary for police and detective supervisors was $69,310 in 2006, with the highest 10 percent earning more than $104,410.Currently, the state paying the highest entry-level salary for a state police officer is California, but New Jersey and Pennsylvania come in a close second and third.

CSI comb crime scenes for physical evidence to determine who committed a crime and how. Police officers often make a career move to CSI after taking interdepartmental courses in forensic investigation. For civilians, it is recommended to earn a bachelor’s degree in criminal justice (or a related field) and contact the local police department about their specific requirements for CSI professionals.

So how much does a CSI make? An entry-level investigator can earn from $12 to $30 per hour. A crime scene investigator who has earned a master’s degree in criminal justice or a related field can earn up to $30.00 more per hour. One of the highest annual salaries for CSI can be found in Phoenix, Ariz., where forensic science technicians earn an average of $63,150. Washington, D.C. comes in a close second at $54,730.

Another popular career path in law enforcement is working for the Federal Bureau of Investigation (FBI). This is a branch of the U.S. Department of Justice that specializes in criminal investigation, particularly terrorist and foreign intelligence threats. They enforce the criminal laws of the United States and protect civil rights.To become an FBI Special Agent, one must first have a four-year degree from an accredited college or university, three years of professional work experience and travel flexibility to work anywhere in the FBI’s jurisdiction. All applicants must also qualify for a Special Agent Entry Program in accounting, computer science, language or law.

There are also many available career opportunities with the CIA, whose principal duty is to collect and evaluate intelligence related to national security, which includes foreign governments, corporations, groups and individuals. Members of the CIA do not have law enforcement authority. Education requirements include fluency in at least one foreign language and a master’s degree with a 3.0 GPA in one of the following areas: international relations, economics, physical science, and nuclear, biological or chemical engineering.

One of the more dangerous criminal justice careers is working as a member of the SWAT (Special Weapons and Tactics) team. This is a specialized paramilitary unit in many American police departments trained to perform dangerous operations. Typical job duties include serving high-risk arrest warrants, hostage rescue, deterring terrorist attacks and subduing heavily armed criminals. SWAT officers are usually police officers who have been specially selected after serving a minimum tenure. Educational requirements are therefore the same. SWAT applicants must undergo rigorous training and pass stringent testing to ensure they are physically and psychologically fit enough to endure the high stress of tactical operations.

So how much does a member of SWAT make? Salaries for SWAT team members are usually similar to those of uniformed officers; they do not receive any compensation over and above their normal salaries. The U.S. Bureau of Labor Statistics reports that in 2006, police officers had an average annual income of $47,460. This can vary depending upon the geographical location and tax bases, and metropolitan areas typically pay more because the hazards are greater.