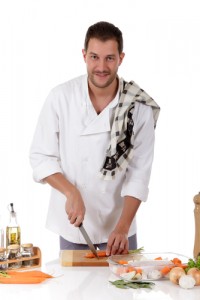 Food science relates to every technical aspect of food.

The October 2006 issue of Food Technology defines food science as “The discipline in which the engineering, biological, and physical sciences are used to study the nature of foods, the causes of deterioration, the principles underlying food processing, and the improvement of foods for the consuming public.”

This agricultural discipline spans from acquisition  whether harvested, as in the case of vegetables or fruit, or slaughtered, as with meat  throughout the cooking process and up to the point where the food is put on a plate and consumed. An extremely interdisciplinary applied science, food science incorporates ideas from fields that include biochemistry, chemical engineering, and microbiology.

Since it touches nearly every part of the culinary process, food science is very much tied to the purchase, sale, and consumption of what we eat. It includes such critical subdisciplines as food safety, food engineering, product development, food chemistry, and food packaging. Whether you’re discussing the cleanliness of a given restaurant, the makeup of a particular dish, or the packing products that contain food items, it’s easy to find real-world examples of these food-science subdisciplines.

Molecular gastronomy  also known as culinary alchemy  is another food-science subdiscipline that is widely used in today’s culinary world. Defined as the application of science to culinary practice, the concept of molecular gastronomy was first developed by Hungarian physicist Nicholas Kurti and French chemist Hervé This.

The pair advocated the application of science to cooking techniques, with their main objectives including the exploration of existing recipes as well as new tools, ingredients, and methods, inventing new dishes, and investigating food-related proverbs and urban legends. Essentially, they were seeking to improve the quality and enjoyment of food, whether it was being purchased, prepared, or eaten.

Today, well-respected chefs around the globe continue the investigation into molecular gastronomy, a concept that was once called “the scientific study of deliciousness.” One of the best-known of these chefs is Ferran Adria, the head chef of El Bulli restaurant on Spain’s Costa Brava. Adria has stated that his goal in cooking is to “provoke, surprise, and delight the diner” by making food not merely something to consume, but to experience.

British chef Heston Blumenthal also practices molecular gastronomy. Chef and owner of the Fat Duck restaurant in the British village of Bray, Blumenthal even opened up his own research and development kitchen in 2004.

Of course, you don’t have to be a high-profile chef at a top restaurant to learn more about molecular gastronomy, or to practice your own methods of improving every aspect of the culinary experience. The study of food science and technology can go a long way toward improving your appreciation of buying, selling, preparing, and eating food  and can also open up new avenues to creative and fulfilling career options. In addition, the wide variety of subdisciplines offered in the field of food science and food technology offer you the opportunity to become your own pioneer in this ever-popular area of interest.