I Want That Job (As Seen On TV) 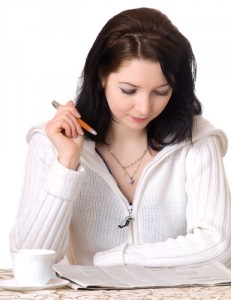 TV can be many things to many people: Full-time entertainer, time wasting distraction, window to the world, inspiration. Inspiration? TV? What are we thinking?

Well… How often have you watched a show and wished you could be part of the action? Not appearing as yourself on an episode of Cops or Dog: The Bounty Hunter, mind you, but taking part in the creation of a new fashion design, for instance, or relentlessly tracking down a vicious criminal as a police detective? We all fantasize glamorous vocations like this. But do you really know what it takes to get there?

Here are four examples of what it takes to get that job, “as seen on TV.”

Homicide Detective: Law & Order Law & Order is one of the most widely franchised shows in TV history-an original show with three prime time spin-offs. The tough, gritty, realistic portrayals of police detectives gathering evidence to build a case have made shows like Law & Order, Law & Order: Special Victims Unit, Law & Order: Criminal Intent, and Law & Order: Trial by Jury staples of network and cable channels alike for over a decade and a half. But what does it take to become an actual police detective or homicide investigator in real life?

Most U.S. police departments require that any candidate for an investigative position such as detective must have served as a uniformed officer for anywhere from one to five years before qualifying to apply for the position, to assure that the candidate has a command of standard police procedures. And how does one become a peace officer? Most police departments have certain minimum requirements regarding age, height, vision, and physical fitness which must be met in order to be considered for employment as an officer. These can vary from location to location, but the most frequently cited qualifications include U.S. citizenship, a high school diploma, a valid driver’s license and no prior felony convictions. After serving their three to five years as an officer, candidates who qualify can earn a position of detective by competitive examination.

Education is of primary importance, and the more education the better. An increasing number of police departments, particularly those in large urban areas, are requiring that their personnel possess a college degree. An associate’s degree in criminal justice, available from many community and online colleges, would be the ideal start, but in order to get “off the beat” and off the street, these same departments also require that candidates earn a bachelor’s degree. Numerous colleges, both on ground campuses and online, offer both associate’s degrees and bachelor’s degrees in criminal justice and related subjects that can supercharge a career path leading to homicide detective.

Just don’t expect that trademark sound effect, dun-dun, to follow you around on your rounds.

The Bravo cable channel’s runaway hit reality show, co-hosted by Victoria’s Secret supermodel Heidi Klum and Tim Gunn, Chair of the Department of Fashion Design at Parsons The New School for Design, provides several ambitious designers the opportunity to showcase their creativity to the notoriously exclusive fashion industry. While the competition can be arduous and the personal relations are occasionally cutthroat, the tasks assigned to the competitors test not only their sense of style but also their resourcefulness and their ability to work under enormous pressure.

So where did these contestants learn all the artistic and practical skills they need to know in order to be chosen for this show? One answer is a college design program. While a formal degree is rarely a requirement for a career in fashion design, studying fashion can accelerate a career by providing a solid background in fashion design basics like sketching, pattern making, sewing and tailoring, material texture and design, color schemes, textiles, accessories and fashion trends. A college design program offers additional benefits as well, such as providing internships in the fashion industry, introductions to industry trendsetters, and access to high-profile contests and competitions, as well as valuable feedback and marketing guidance. The majority of designers currently at work have an art or design school on their resume.

And who knows? You might even end up as a contestant on Project Runway. Wouldn’t that look great on your resume?

Private Detective: Monk Actor Tony Shalhoub has won three Emmy Awards playing Adrian Monk, star of the hit USA Network series Monk. Monk acts as a private detective in his role as a consultant to the San Francisco Police Department. But Monk is a detective with a difference—he suffers from a veritable catalog of phobias, all neatly prioritized thanks to his obsessive-compulsive disorder (OCD). This psychological malady works in his favor, however, when he trains his attention to detail toward spotting anomalies in a crime scene.

So what did Monk have to do to become a private eye? As a former homicide detective, he’d have gone through the same regimen as the police detectives mentioned above in the Law & Order shows. Although there are no formal educational requirements for most private investigator jobs, the majority of employers prefer a prospective investigator to possess a college degree, and Adrian Monk obtained his degree at UC Berkeley (as seen in the fifth season episode, “Mr. Monk and the Class Reunion.” Although we don’t know in what discipline Monk received his degree, a degree in criminal justice, forensic sciences, law enforcement, or security administration can prove helpful to anyone aspiring to become a private detective or an independent investigator. The majority of states also require private detectives and investigators to be licensed. Licensing requirements vary from state to state, but usually require at least a criminal background check and the successful completion of an examination. Many states, such as Monk’s home turf, California, have stringent regulations which include up to 6,000 hours of prior security work, mandatory training programs and additional requirements to obtain a firearms permit.

Just don’t forget to bring the handiwipes to your crime scenes. Germs are everywhere, you know.

Sales Management: The Office In his role on NBC’s hit comedy The Office, playing the Scranton, NJ, Division Manager for paper company Dunder Mifflin, Michael Scott (Steve Carell) is the very definition of the boss from hell. A good manager defines business objectives, allocates resources effectively, motivates employees, solves problems, and generally works to keep a business on track with its goals. Michael Scott attempts all of these tasks, but comes at them from so far out in left field that most of his employees are left wondering, “What was he thinking?” But Michael Scott can serve as a wonderful negative example of what not to do as a manager.

What kind of background would Michael Scott have to possess to rise to this middle management position? (And what will Jim Halpert have to know to become a candidate for this position when Michael is inevitably fired?) While a salesperson can often secure an entry-level job with just a high school diploma, sales managers are usually required to possess at least a bachelor’s degree. Depending on the industry in which the sales manager works, a bachelor’s degree in any of several disciplines—including business administration, accounting, finance, economics, business law, and statistics—could prove suitable. For a position such as Division Manager, Michael Scott might be required to possess an MBA (Master of Business Administration). Many executive and management positions often require an MBA, which is a universally recognized indication that the bearer has mastered the core procedures, practices and skills of the business world.

So it’s a pretty good guess that Michael Scott does not have an MBA.