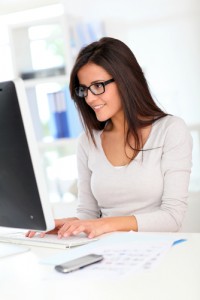 The image of an intrepid truth-seeking reporter and journalist has always struck a chord in our collective consciousness. It’s a profession that pervades even our pop-cultural mythologies as the chosen alter ego occupation for superheroes such as Superman and Spider Man. Even today’s reporters of local and national publications enjoy an element of celebrity.

It’s no wonder many people want to become a journalist; journalism is a career that can promise a lifetime of excitement, travel, knowledge and perhaps even fame. But despite its glamorous draw, becoming a journalist requires a lot of hard work that extends beyond the 9-5 work week.

Aspiring journalists are encouraged to get a bachelor’s degree in communications, journalism or English. Some employers will accept candidates with other majors, but they will look for experience at newspapers, broadcasting stations or other news organizations. Internships and freelancing jobs are great ways to gain experience while still in school.

Another widely accepted and convenient way to earn a degree in journalism is to take courses online. There are many different types of online journalism courses available, but the best way to ensure credibility is to choose a program that is affiliated with an accredited university.

According to the Bureau of Labor and Statistics, the job outlook for journalists is expected to increase by about two percent from now to the year 2016 due to the consolidation of publishing and broadcasting industries. Although still a competitive field, the best opportunities are expected to be in online media.