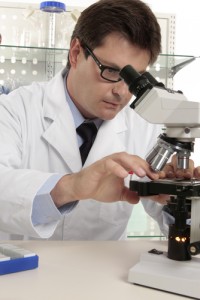 This category includes those professions that specialize in analyzing evidence rather than in preventing or solving crimes. It includes people whose efforts take place partly or mainly in laboratories, such as crime scene investigators and forensic specialists employed by police departments and federal agencies.

Forensic scientists can specialize in areas of analysis, dealing only with DNA or firearms, so earning a degree in science or science-related technology is a necessity. Studying relevant subjects, such as criminal justice, can also round out a career that works so closely with the unfortunate results of criminal activity.

Numerous career opportunities are available in the field of forensics. Below is a summary of a few of the most popular positions.

The CSI is responsible for gathering evidence at the scene of a crime and investigating and examining the evidence in a lab. At the scene of a crime, the CSI seeks out and secures physical evidence, such as hair, fingerprints and DNA samples, and writes reports consisting of detailed observations of the site scene.

Also known as Forensic Technician or Crime Scene Analyst, this is often the entry level position for eventual promotion to full CSI. A Crime Scene Tech responds to crime scenes and performs a variety of investigative tasks to document a crime including taking photographs, recovering evidence, processing latent fingerprints, and other tasks assigned by superiors.

Forensic medicine is a discipline within the medical profession which applies the principles, techniques and knowledge of medicine (including dentistry, clinical psychology, biology and chemistry) to a legal context.

Forensic nurses cooperate with police and other law enforcement agencies in the clinical investigation of various crimes. Depending on their location and specific job responsibilities, they might collect evidence, diagnose trauma or treat people injured during the commission of a crime.

Pathology is a specialty area in the field of forensics. A forensic pathologist is a medical doctor who performs autopsies to determine details concerning the death and the identification of an individual.

A forensic anthropologist specializes in using skeletal remains to identify information about an individual such as height, weight, gender and ancestry. Some anthropologists assist in the recovery and delivery of remains to protect the integrity of the bones during the transfer from recovery site to laboratory.

Coroners hold various responsibilities related to both administrative and investigative duties, depending on their locale and jurisdiction. Some coroners work directly with law enforcement and forensic professionals to investigate details related to the cause of death of an individual.

You enjoy finding clues and solving mysteries. You’re technically savvy and seeking an interesting career. Sound like you? If so, we’ve found an area of study that may be the missing piece.

Your idea of a great day at the office: hacking into computers, finding evidence and solving computer crimes. If this sounds like the ideal career path for you, we’ve found an area of study that could take you there.