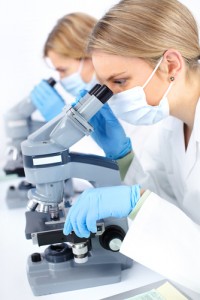 Biologists research and analyze living organisms and their relationship to each other and their environment. They seek to understand all aspects of living things — origin, structure, function, growth and evolution.

Careers in biology typically focus on research and development in a variety of disciplines. Fields such as medicine, microbiology and zoology are popular career paths for biologists.

Typically, a doctorate degree is required for most research and university faculty positions, but some applied research positions and product development jobs can be obtained with only a master’s degree in biology or one of its subfields.

Biologists work in a number of fields — all centering around the science of life in some shape or form. The majority of biology jobs are in research and development. Positions are most plentiful at universities, the government or privately funded laboratories. Biologists often take positions that combine aspects of other sciences — like chemistry or physics — with their biology training.

Some common areas in which biologists work include:

The different career paths one can follow with an education in biology are wide ranging and can also be quite lucrative.

Many positions are driven by research funding, which depends on the economy among other factors. The U.S. Department of Labor predicts average growth for biology positions over the next decade.