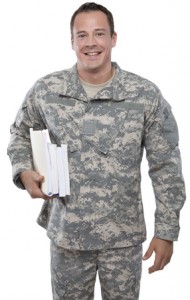 Making sure your military training is translated into college credits is one thing, but what do you do about subjects you’re already well versed in through self-education? Shouldn’t you be able to get credits for knowledge you already have?

The College Level Examination Program (CLEP) was developed by The College Board (the same company that developed Advanced Placement tests) to cover precisely this circumstance. Most online degree programs and universities accept CLEP results as a basis for awarding credits with 34 different examinations in a range of subjects.

CLEP testing is particularly important for military students, as the breadth of experience encompassing a military career often educates a person far beyond classroom experience. With so many CLEP credits being accepted at accredited online universities and colleges, students can cut the amount of time and cost necessary to obtain higher education dramatically.

The DANTES program encourages service members to take advantage of CLEP testing as a part of its program. DANTES maintains a list of CLEP testing centers and designates those that are military friendly, and many military bases now offer CLEP testing through the base education center. The Department of Defense will even fund a portion of the CLEP test through DANTES.

It is important to note, however, that CLEP testing done on military bases does not cover the full range of available subjects. To fully maximize credits through CLEP, military students will most likely have to go off base to approved CLEP testing centers.

There are 34 CLEP tests offered on a variety of subjects, and most of the tests represent material a student would learn in the first two years of college. Students who already have the basic material should not spend time and money to gain credit for knowledge they already possess, so CLEP testing not only presents the opportunity for necessary college credits, but also the ability to bypass lower level classes in subjects like English or foreign languages with a demonstrated proficiency score.

In essence, CLEP not only saves a student time and money, but it allows them to delve deeper into subjects of interest by shortening the amount of time spent reviewing familiar materials.

Broad areas of CLEP testing include the following (with several exams available in each subject area):

Base education offices and libraries carry study guides for each exam, and they can also be purchased for reasonable prices at bookstores like Barnes and Noble or online through Amazon.com. Students should devote a few weeks to reviewing and organizing their knowledge. After all, a few weeks of extra studying is far less time consuming than an entire semester of courses.

In addition to base education offices, counselors at schools with military-friendly degree programs are also trained in spotting areas students will most benefit by taking the CLEP. A careful military records examination could save you a significant amount of time and money.

*Degreesfinder.com is not affiliated with the armed services or any government entity