Tuition Assistance for the Military 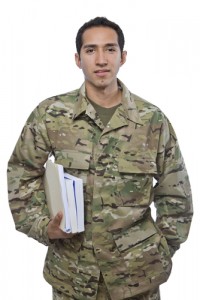 Signed into law in June 1944 as the Servicemen’s Readjustment Act, the GI Bill originally offered service members college scholarships regardless of whether they served on the frontlines or not. In the decades since, the GI Bill has been revised. According to Military.com (1), the term GI Bill is used to describe any Department of Veterans Affairs education benefit offered to members of Active Duty, Selected Reserve and National Guard Armed Forces and their families. Among the more common GI Bill variations are the Montgomery GI Bill, the Post-9/11 GI Bill and GI Bill 2.0 which improves on the Post-9/11 GI Bill.

While generous, programs under the GI Bill do have limits. For example, the GI Bill has specific maximum charges per unit and maximum total fees per term for each state (6). In addition, the Army, Air Force, Marines, Navy, Coast Guard, National Guard and Reserves each have their own forms of Armed Forces Tuition Assistance with their own eligibility requirements and restrictions (7).

Some colleges and universities participate in the Yellow Ribbon Program, an enhancement program under the GI Bill that helps students pay tuition and fees above the GI Bill’s limits. To qualify for these additional military education benefits, the school must participate in the Yellow Ribbon Program and the student must meet specific criteria (8).

In addition to the Yellow Ribbon Program, the “Top-Up” program allows eligible GI Bill recipients to use GI Bill benefits to supplement tuition and fees not covered by tuition assistance (9).

The Veterans Educational Assistance Program, or VEAP, is an optional tuition assistance program that matches service members’ contributions on a $2 to $1 basis. The benefit amount varies based on the contributions made, and members must meet specific eligibility requirements to participate. If the funds are not used within 10 years from release of duty, the service member’s portion of the remaining funds will be refunded (10).

The Reserve Education Assistance Program, or REAP, is a military education benefit for members of the Reserves called to active duty in response to a war or national emergency (10). It’s important to note that this tuition assistance program cannot be used in conjunction with other VA educational benefits (11).

Depending on if a service member has any GI Bill benefits left, those remaining military education benefits can be transferred to immediate family members. However, the service member must meet specific criteria such as having already served six years with an obligation of serving four or more in the future (12).

The Military Spouse Career Advancement Accounts program is another tuition assistance program for spouses. Up to $4,000 of tuition assistance is available to military spouses who are pursuing degrees, credentials or licenses leading to employment in portable career fields (13).

Another program, Survivors & Dependents Assistance, is available to surviving sons, daughters and spouses of deceased or disabled veterans whose deaths or injuries meet specific criteria. This program has strict requirements and offers up to 45 months of educational benefits (14).

Getting Help with Military Tuition Assistance

The U.S. government can offer generous tuition assistance to those who qualify. However, with multiple programs, eligibility requirements and benefits, it’s not easy knowing which GI Bill program is right for you. Help is available from the Department of Veterans Affairs, your base’s Education Services Officer and college enrollment advisors (15) (10).

*Degreesfinder.com is not affiliated with the armed services or any government entity