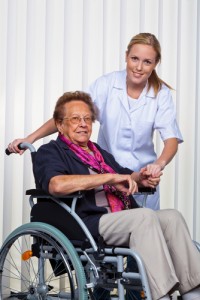 Providing care for an increasingly aging population is the domain of the geriatric nurse. Senior citizens have a unique set of age-related medical and emotional problems which are addressed by this occupation. Geriatric nurses can work in many venues, including hospitals, elder care facilities, or in patients’ homes.

In order to specialize in geriatric nursing, one must first earn a Registered Nurse degree. This usually requires a two- to four-year course of study which results in one of three initial nursing degrees: an Associate of Science Degree in Nursing (ADN), the end result of a two-year program offered by nearly 850 community and junior colleges around the country; a Bachelor of Science Degree in Nursing (BSN), a four-year course of study currently offered by more than 674 accredited colleges with nursing programs; or a Registered Nurse degree from an RN Diploma Program, often referred to as a “hospital diploma,” which is a specialized program that lasts about three years.

To see a list of all available degrees that can lead to an RN degree or a specialty in geriatric nursing, please see our information about online nursing degrees.