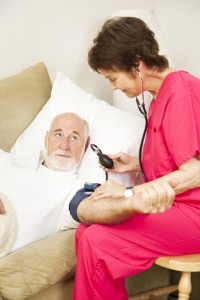 Home health nurses (also known as “visiting nurses”) bring professional healthcare services to patients who are home-bound or who are recovering from injury or illness in their own homes. This can include the elderly, individuals with limited mobility, new mothers and infants, the terminally ill, or any of a number of other temporary or chronic conditions which can be served outside of an institution. Home health nurses range from general nursing care to hospice personnel to caregivers who assist the incapacitated with basic functions of daily life, such as eating and bathing.

In order to specialize in home health nursing, one must first earn a Registered Nurse degree. This usually requires a two- to four-year course of study which results in one of three initial nursing degrees: an Associate of Science Degree in Nursing (ADN), the end result of a two-year program offered by nearly 850 community and junior colleges around the country; a Bachelor of Science Degree in Nursing (BSN), a four-year course of study currently offered by more than 674 accredited colleges with nursing programs; or a Registered Nurse degree from an RN Diploma Program, often referred to as a “hospital diploma,” which is a specialized program that lasts about three years.