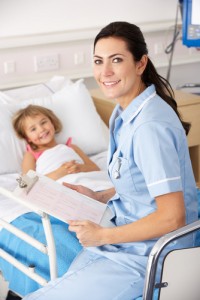 Pediatric nurses specialize in providing health care to children of all ages, from infancy through adolescence. Pediatric nurses are educated in the developmental stages of child growth, and their responsibilities can range from disease prevention and treatment to education to assisting patients and their families deal with mental or physical disabilities.

In order to specialize in pediatric nursing, one must first earn a Registered Nurse degree. This usually requires a two- to four-year course of study which results in one of three initial nursing degrees: an Associate of Science Degree in Nursing (ADN), the end result of a two-year program offered by nearly 850 community and junior colleges around the country; a Bachelor of Science Degree in Nursing (BSN), a four-year course of study currently offered by more than 674 accredited colleges with nursing programs; or a Registered Nurse degree from an RN Diploma Program, often referred to as a “hospital diploma,” which is a specialized program that lasts about three years.