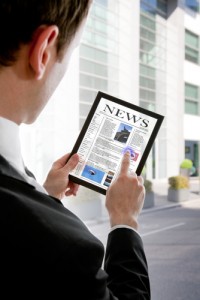 Emerging media is a new degree designed to give students a full understanding of the various forms of developing media populating the 21st century. Social media, web design, mobile apps, virtual reality, and games are all examples of emerging media. Students with degrees in this area of study are trained to be well-equipped to handle the changing culture and landscape of media design and implementation in the modern world.

What Types of Courses Will I Take In an Emerging Media Major?

Emerging media focuses on an understanding of a wide variety of techniques and principles, so classes are somewhat diversified. A typical emerging media curriculum includes classes in writing and research, communication, design principles and computer science.

What Types of Jobs Are Available for Emerging Media Majors?

Emerging media majors might find jobs as computer program designers, web architects, television or movie designers, or in sales through social media and SEO (Search Engine Optimization) planners. Emerging media specialists might be called on to:

What Can I Expect To Earn with an Emerging Media Degree?

The Bureau of Labor Statistics lists “multimedia artists” as one job category that might fit an emerging media major’s interests. Multimedia artists earn a median annual salary of $58,510, according to the BLS. In 2010, those working in the motion picture and video industries earned a median salary of $66,190; software publishers earned $65,290; computer designers earned $56,000; and advertising and public relations workers earned $55,890 per year as a median salary. Newcomers to the field should expect to earn far less initially than those who have been working for several years or who have original work attributed to them; however, this is also a field in which good work can quickly propel you to the top of your field and allow you to earn substantial salaries.

What Is the Job Outlook for Emerging Media Majors?

The Bureau of Labor Statistics states that multimedia artist jobs will grow by eight percent over the next ten years, slower than the national average.

If you are interested in a career involving computer technology but do not want to major in standard computer degrees such as computer science or programming, emerging media may be an appropriate choice for you. You will begin your career in an exciting and ever-changing field where employers are often looking for fresh ideas and workers who enjoy challenges.