How Do I Become a Flight Attendant?

DegreesFinder > Online Degrees > Education Articles and Advice > How Do I Become a Flight Attendant?
Tweet 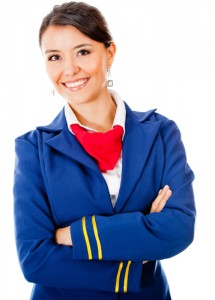 If you ever dreamed of becoming a flight attendant, you were not alone. Thousands of children found these air stewards and stewardesses fascinating, and grew up to enjoy their dream careers as flight attendants with major airlines. Flight attendant jobs have always been seen as slightly glamorous and exciting, with the opportunity to travel to exotic locations almost every day.

Of course, the truth is not quite that exciting. While flight attendant jobs do provide good opportunities to travel, they are also demanding in some respects and call for a great deal of patience and skill in handling the public. However, if you have great interpersonal skills and want the opportunity to travel, this may be the job for you.

How Do I Become A Flight Attendant?

Flight attendants are not required to have a particular degree, although a two- or four-year degree may make you more attractive to employers. Instead, flight attendants learn their job through intensive on-the-job training programs.

Some airlines require that flight attendants have a certain amount of customer service experience prior to working for them. This might be in retail sales, at a restaurant, or in some other customer-rich environment. The purpose of this requirement is to screen those applicants who could not work with the pubic easily.

Flight attendants are trained by their companies in compliance with Federal Aviation Administration requirements. This training includes lessons in safety, customer service, and first aid. Each training class is specifically geared to a particular type of aircraft. The FAA issues a certificate to all flight attendants who successfully complete an approved training program and pass a test. However, flight attendants must be re-certified if they change jobs and move to a different type of aircraft.

What is the Average Pay for Flight Attendant Jobs?

This does not mean that new applicants cannot find jobs at all, but that the competition for the available jobs will be relatively strong. As older flight attendants retire, new jobs will open; however, applicants may have to work for several years on “stand by” before finding a permanent, well-paid position.

What Qualities Should I Have If I Want To Be a Flight Attendant?

There are a few physical requirements for flight attendants; they must be tall enough to reach overhead bins, for example, and must pass a relatively stringent physical exam. Airline companies want flight attendants who are well-groomed and presentable, although the “supermodel” look for flight attendants is not based in reality. Men as well as women get flight attendant jobs every day, and many of these men and women are not in their first youth. What many airlines want is someone who presents a neat, clean appearance in person and dress, and who does not have wildly-colored hair, multiple piercings, or visible tattoos.

Beyond the physical requirements, the main qualities a flight attendant should possess are  patience and a good attitude. Flight attendants often work long hours and must make good judgment calls when dealing with patrons. It is not unusual for a flight attendant to have to deny a customer alcohol, for example, if he or she feels that the customer has had too much to drink and may pose a threat to the aircraft or other passengers.