Should There Be More Men in Nursing?

DegreesFinder > Online Degrees > Education Articles and Advice > Should There Be More Men in Nursing?
Tweet 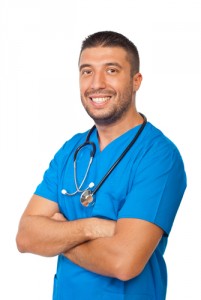 Nursing is traditionally thought of as a female profession, since nurses are caregivers and usually act as assistants to doctors and other medical professionals. This stereotype persists today, but is becoming less prevalent.

Male nurses used to be looked at with derision; it was assumed that they just didn’t have what it took to be doctors, and therefore settled for a women’s job. Or it was assumed that they wouldn’t be as emotionally sensitive and nurturing as female nurses. Men are also deterred from entering the nursing profession for fear that they will be seen as unmanly, especially in this male-dominated, patriarchal society. There is also the assumption that nurses only work for doctors, are poorly paid, and don’t have career growth opportunities. The reality is quite different. I know a woman who works as a nurse, earns a six figure salary, and says that she prefers to work with male nurses. She claims that men tend to be better in emergency situations and the ICU unit because they are more practical thinkers and don’t get flustered too easily.

So times seem to be changing. Nowadays there’s “Male Nurse Magazine,” male nurse blogs like “ER Murse,” and male nurse characters on popular TV dramas like “ER” and “Grey’s Anatomy.” Yet men still only make up six to seven percent of the nursing population, although the number enrolling in nursing schools is on the rise. But they are considered to be a privileged minority. They are not discriminated against or treated with hostility in the profession to the same degree that women are in male-dominated occupations. In fact, some consider that men entering into nursing will raise the occupation’s prestige as a whole. The top roles in nursing still seem to emphasize what are traditionally seen as male characteristics: leadership, dedication to work, and technical knowledge. Male nurses also tend to have more of a rapport with male doctors. However, this identification can also backfire: male nurses may start to feel dissatisfied with the limitations of their position and want higher status. Men do face some limitations in nursing as well: as recently as the 1980s, men were not allowed to work in ob/gyn departments and maternity wards, based on the rationalization that their presence would cause distress to the female patients. This barrier has broken down, and nowadays it is even possible for men to become nurse-midwives.

Men might experience subtle biases in the nursing profession. In addition to being seen as undesirable to work in women’s health fields by their female counterparts, male nurses might make their patients uncomfortable. Patients might be too married to the stereotype that nurses should be female because they’re more caring and supportive. Research supports that men care just as much as women, not only about their patients, but about empowerment of the profession as a whole. It’s also a woman-dominated profession, so getting along well with women (not to mention being okay with a female supervisor) really is a job requirement. It’s also more important for male nurses to have a strong sense of self-identity, or else they risk being too affected by outside pressures or questions about their masculinity. Male nurses might also be discriminated against by male doctors, who might stereotype them as either homosexual, or being too incompetent to make it through medical school to become a doctor. For this reason, male nurses often bond with female doctors, as both have outsider status in a typically sexist work environment.

There are many advantages for men entering the nursing profession. It can be a very exciting and dynamic career, particularly in the critical care and military nursing fields. There is lots of potential for career advancement, high salaries, and the chance to be on the cutting edge of science and medical advancements. There is a wide variety of working environments, from a fast-paced general hospital ER ward, to a more community-minded and relaxed private practice. Men enjoy interacting with patients on a daily basis just as much as women do.

Television shows like “ER” and “Grey’s Anatomy” present a fairly realistic view of the medical professions, although it is of course glamorized through the Hollywood viewpoint. But even in these shows, negative stereotypes about nurses still exist. And most of the lead male characters are doctors, not nurses. “Grey’s Anatomy” centers on surgical interns. There was one episode where a female surgical intern was furious at having been compared to a nurse. In another episode, the tough Cristina Yang character is seen reluctantly playing into a patient’s “naughty nurse” fantasy in order to help speed up his recovery. On this show, nurses are mostly used as comic relief, while the physicians are seen as heroic. Female nurses aren’t really singled out over male nurses; it’s more that the entire profession is degraded.

“ER” differs somewhat because there are actual male nurse characters. Since the show centers on action in the emergency room, nurses play as vital and pivotal a role as doctors do. Several of the show’s lead characters are female nurses. Juliana Margulies’ character, Nurse Carol Hathaway, actually decides not to go to medical school so that she can make more of a difference in the nursing field. Abby, played by Maura Tierney, is a smoker which is surprisingly typical for nurses. Smoking helps them deal with the stress of the job. Although there haven’t been any male nurse cast regulars, there have been several plotlines centering around guest stars playing male nurses. In general, though, nurses are still portrayed on this show as being subservient to physicians.