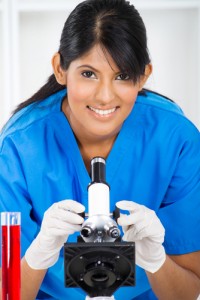 How Do I Train To Become A Medical Technician?

Medical technicians can often get an associate’s degree in just over a year through a specific vocational program designed to train students quickly for careers in this field. Some students take a two-year associate’s program in biology or chemistry in order to become medical technicians.

How Much Do Medical Technicians Make?*

The Bureau of Labor Statistics reported the following median salaries in May 2010 for various categories of employers within the field:

Your location may also have an impact on your salary. While salaries are generally higher in large urban areas, cost of living expenses are also much higher, so overall earnings may not be equivalent.

Where Can I Find A Job As A Medical Technician?*

Medical technicians are employed by hospitals, doctor’s offices, the government, and private laboratories. According to the Bureau of Labor Statistics, 52 percent of these professionals are employed in hospitals, while another 16 percent are employed in private laboratories. The majority of jobs in these fields will be found in labs in these locations. Only ten percent of medical technologists or technicians work in doctor’s offices and only three percent work for the government, so these jobs are relatively limited in number.

However, the Bureau of Labor Statistics projects that the number of job opportunities in these fields will increase by 15 percent over the next ten years. This means that there should be at least 23,800 new jobs for medical technicians and medical technologists over the next decade.

Do I Have To Be Licensed To Be A Medical Technician?

You can find out if you are required to take a certification or licensing test in your state by visiting your state’s Department of Health website. There you will find information on licensing procedures for your state for medical technologists and medical technicians.